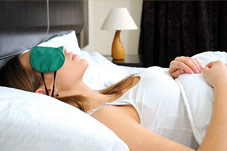 If you're the average person in the industrialized world, chances are you don't get enough sleep, or if you do, it's not as restful as it could be. Whether it be staying out late at social functions, waking up extra early to make it to the gym before work, or working extra hours to make up for the skyrocketing costs of living in many places, people are sacrificing sleep on the altar of productivity. And while many people shrug off fatigue as an inevitable side-effect of modern life, others know that there are ways to make sure sleep is given its proper place in life, and that doing so can give great benefits.

Sleep issues seem to largely fall into three categories: insomnia, non-restful sleep, interrupted sleep. These can be influenced by a variety of factors, from personal habits, to diet, to scheduling, to body chemistry. Some are things we can control, and some we cannot. But that doesn't mean there aren't ways to make sure we're getting the best rest we can at night.

Far from being just a way to let the body rest, there are many important things that happen during sleep. The brain gets a chance to clean itself of toxic byproducts that would otherwise accumulate, and tissues get the chance to be repaired. Hormones get secreted that regulate our hunger, and others go towards muscle and tissue building. Our brains also get to catalogue our daily experiences and encode new memories and new knowledge, making us better able to function and remember things during the day. Our immune system gets a healthy boost, too, with increased production of white blood cells that can can help us fight off sickness.

Without enough sleep, we become irritable, unable to focus, we become less productive, and we become short-tempered, which can lead to strain on interpersonal relationships.

Sounds like a nightmare, right? The scary truth is that lot of us are living it.

So how can we get ourselves on the right track, and improve the quality of our sleep? Try these five healthy tips:

1) Good diet. What we eat can affect our brain chemistry and our sleep cycles just as much as it affects the rest of the body. People with low amounts of certain minerals, such as calcium and magnesium, have been seen to have less-restful sleep than those who have more of those nutrients in their bodies. This is because these minerals, as well as others, help in important biological processes, and contain things like tryptophan, a compound that activates the neurotransmitters responsible for feelings of calmness and relaxation.

2) Use less caffeine. Everyone knows that drinking coffee late in the day can have serious effects on our sleep, but people sometimes forget about the presence of high amounts of caffeine in other, less obvious places, like soda and tea. People who drink these sorts of drinks later in the afternoon may find themselves having a harder time going to sleep, as it takes up to 6 hours for caffeine to totally leave the body.

3) Drink less alcohol. While a drink or two every so often isn't considered unhealthy for most people, drinking too much too often can seriously affect the quality of our sleep. Research has shown that, although alcohol can make people sleepy, people who drink several drinks every day have less refreshing sleep. That means in spite of technically getting enough hours of rest, such people wake up not feeling as rested and alert as they would be had they gone to sleep sober. This is because alcohol can interfere with REM sleep, which means that sleep's benefits on motor function and concentration are hindered.

4) Less screen-time before bed. This is something that's come up a lot in recent years: people finding themselves having a harder time falling asleep because of frequent screen use (smart phones, tablets, laptops). As we lay awake in bed catching up on social media, reading the news, or watching videos, we are exposing ourselves to high amounts of “blue light,” which has been shown to interrupt the natural production of melatonin – the sleep hormone. Putting away electronics an hour or more before bedding down might help.

5) Exercise. One of the oldest remedies for sleeplessness. When people get enough regular physical activity, they spend more time in “deep sleep” – the most restful kind – as their body rebuilds tissues, and their body releases more endorphins. These chemicals promote