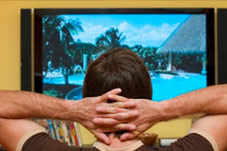 Why is Blue Light Before Bedtime Bad For Sleep?

Sleep and technology may seem like two very different parts of modern life, but they're more connected than you may think. And no, we're not just talking about noise machines, sleep inducing herbal supplements, and tinted windows (although those are very useful). We're talking mainly about how the way we use technology may be having a negative affect on our sleep cycles. You've probably read about the connection between “blue light” and sleep difficulty, but how does it actually work? To answer that, we should go back a little bit and touch on how things have changed with advent of modern tech.

Sleep before the invention of electricity was much different than it is nowadays. In pre-industrial societies, it was far more common for people to go to sleep soon after sundown. There was less to do at night, since most human activities require light, so there was no real need or reason to stay up late. Yes, people had candles and fires, but those sources of light are typically gentle, weak, and don't typically provide much stimulation, and could provide only simple illumination. Modern sleep researchers claim that people would have two different sleeps at night, between which there could be hours of familial interaction, reading, or socializing.

Then in the 19th century came electric lighting, which spread from buildings to streets, and finally to homes. Now, bright light could be turned on and off easily whenever one wished, allowing people to continue activities during the night that otherwise would have had to be conducted with the bright available light during the day. This is when sleep habits began to change, according to researchers. People began staying up later because they could, and the later they stayed up, the less time they had to sleep. Combined with increasingly-systematized work schedules for industrial laborers that regulated start and end times for work, we got the modern conception of sleep: 7 to 8 hours a night, with an exact start time and an exact end time.

As you can see, technology changed our approach to sleep and our relationship to it. And with recent advances in entertainment technology – mainly computers, televisions, and smart phones – things have become even more complicated.

“Screens” (we'll just call them that for now) emit very short-wave light, which contains a lot of the blue end of the light spectrum. Moreso, in fact, than daylight. As scientists have learned, blue light affects the levels of melatonin in the body, the hormone responsible for sleepiness. By affecting or repressing those levels by exposing themselves to higher levels of blue light, people are changing their circadian rhythms – their natural sleep cycle. By exposing ourselves to electronic light from our various screens, we're inadvertently training our bodies to go to sleep earlier or later, and throwing our sleep cycles out of order. Thus more screens later at night equal difficulty sleeping.

This can be hard to avoid for many of us. After a long day at work or out and about, it's common for people to relax while scrolling through updates on social media apps, reading the news, or looking up information. Many of us even read books or watch television shows on our screens, and the amount of time these pieces of entertainment require to finish can lengthen our exposure to this light. The entertainment we get from these screens is pleasurable and low-effort, but this is precisely what makes it so deleterious to our sleep health.

Not everyone is willing to give up all those things, especially at night and when close to going to sleep for the night, but thankfully there are still ways to enjoy keeping up with friends and colleagues on social media and catching up on our favorite content without ruining our sleep cycles.

1) Use alternative light settings. Many smartphones, laptops, and tablets have features which allow you to change the appearance of the screen, rendering content in warmer hues with less blue light emitted. This way, you can still read, watch, and play, but without disturbing your melatonin production.

2) Dim your screen. Simple enough, right? Lowering the amount of light coming into your eyes will make sure your screen won't be as stimulating as it would be if it were bright, meaning your body could have an easier time relaxing into sleep.

3) Have a cool-down time. Go ahead and use your tablets, your phones, your laptop … until about an hour or so before bed. This little bit of rest from light stimulation could be all you need to start the night's slow journey into sleep.